‘With echoes of Lydia Davis, Beckett, Eimear McBride and Max Porter, Oona is a nuanced narrativisation of the dislocation, disruption and stasis of grief, a treatise on silence, a drift on desire and sexual awakening.’

You can hear the interview here. (May 12, 2014 podcast) or click on the photo to be taken to the interview. Over 50 of Falkowska’s handwoven tapestries are on view at The Dock, Carrick-on-Shannon, County Leitrim through June 7, 2014. 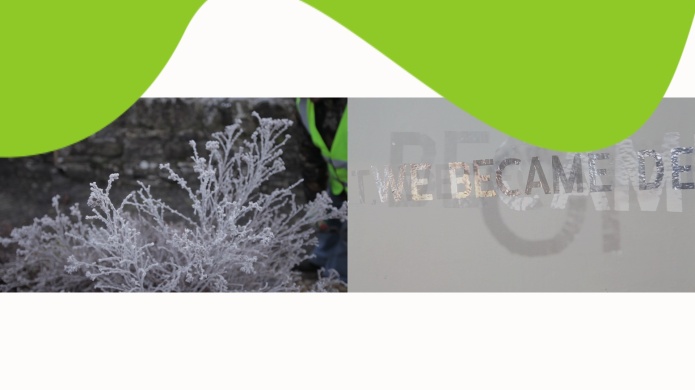 Through multiple digital possibilities, script can go beyond its function in the mediation of information and gains an increasingly autonomous, aesthetic status. Analog or digitally based films or film fragments are referred to as script films, whereby moving, animated, graphically designed and, above all, script set to sound play the main role.
The exhibition SCHRIFTFILME leads to places in which we encounter moving script: artistic productions, but also feature films, advertising, music videos or media facades in cities. The project SCHRIFTFILME represents an attempt to compile, typologize and publically present classical popular as well as lesser noticed and frequently difficult to access script films from twenty countries dating from 1895 to the present.

I’ll be speaking, along with Sarah Browne, about our collaborative project on Eileen Gray in which my poem, ‘something permanent (for Eileen Gray)’ is being transmitted worldwide via Morse Code (above) from IMMA.

Mark Wall of the Southeastern Amateur Radio Group transmitting ‘something permanent’ (for Eileen Gray) via Morse at the Irish Museum of Modern Art, Dublin, October 2013.