First review is in for Oona, by Anne Cunningham in the Sunday Independent:
link here

Extract:
‘And while new volumes of autofiction, enjoying a moment right now, are pouring out of the printing presses, very few of them are as elegant, as humane, as ingeniously and beautifully crafted as this. It begs returning to.’

‘With echoes of Lydia Davis, Beckett, Eimear McBride and Max Porter, Oona is a nuanced narrativisation of the dislocation, disruption and stasis of grief, a treatise on silence, a drift on desire and sexual awakening.’

Longtime friend and collaborator, Justyn Hunia and I, performed my poem ‘Rosehip Syrup’ while screening Justyn’s footage and sound clips of his 92-year old grandmother, Amelia, who lives in an old wooden cottage in the southeast of Poland. Justyn has been documenting Amelia and her rugged, rural life for more than ten years. We finished by singing a song ‘with’ onscreen Amelia. Thanks to Christodoulos Makris and Olesya Zdorovetska, curators of the event. And thank you Olesya for the photos. 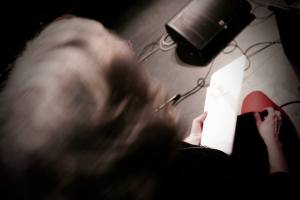 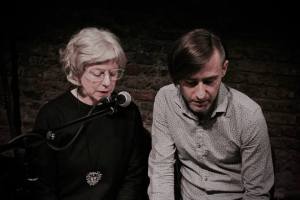 Text we displayed at the start:

Amelia is a 92 year old resident of Wola Komborska, a small village scattered amongst hills and forests of south-east Poland, where she spent her entire life in a traditional wooden cottage built by her great-grandfather. For over 10 years her grandson, Justyn Hunia was documenting her life, recording her life stories, songs, fantastical tales, and daily activities, guided by the rhythms of nature and liturgical year. Last autumn Amelia moved out of the cottage due to health reasons.

On a summer day of June 2013 Justyn took his poet-friend Alice Lyons to Wola Komborska, where Amelia treated them to her famous barszcz soup and a bowlful of pierogi. This encounter inspired Alice to produce an imaginative poetic account of that visit, ‘Rosehip Syrup’, which found its way into her collection The Breadbasket of Europe (2016, Veer Books, London).

I’ve designed and am supervising construction of Amphitheatre for Introverts (and others) on the shores of Lough Lannagh, Castlebar, County Mayo, Ireland.  The amphitheatre’s terraces are made of Kilkenny limestone and the lines from one of my poems will be carved into the risers: the place/between water and sky/holding sound/it is underloved/and an amphitheatre.

This is a public art project commissioned by The Arts Office of Mayo County Council and associated with the new pool and gym that are being constructed further back on this site. I hope this place will be a quiet space that captures the sounds of the lake and waterfowl and gives the public a place to be inward, to look at Croagh Patrick (when it’s clearish) through the trees, to do nothing. Of course, all the extroverts want to have gigs and readings and performances here. That is fine by me. But introverts, this place is first and foremost made for you.

The photo on the left shows the mid-phase of construction while the right shows the early shaping and stoning of the terraces.

Friday night sees all invited poets and special guests reading a favorite Irish poem–I’m reading one by Raymond Carver–was he Irish, you ask?–no, yet he wrote one of my favorite Irish poems nevertheless. I’ll say more on the night.

“The best pieces here hint at how the poet can get in touch with what Richard Murphy calls “the Queen of Inner Operations”. It would be hard to define it better than Alice Lyons when she talks of “fumbling, feeling, groping, playing – not so much to recover radical innocence as to create conditions for radical stumbling”.

The anthology is available from all good independent bookshops and Dedalus Press.

Here’s a link to a reading I gave as part of my fellowship at the Radcliffe Institute, Harvard University. Radcliffe Magazine featured me and my fellow poet fellows Sarah Howe and Ross Gay asking us why we write poetry.

Poet & critic McLane writes on seven poets, including me, for Vela Magazine:

“Alice Lyons, the American poet, essayist, filmmaker, and curator, has just returned to the U.S. after eighteen years in Ireland. Lyons has a wonderfully bi- or tri-focal perspective on poiesis—on “making,” in its broadest sense—and her several inheritances (American, Irish, and European) make themself felt in her forthcoming book, The Breadbasket of Europe (out March 2016). Breadbasket is both lyrical, in the traditional sense, and conceptual. (Lyons’s title is, by the way, a common epithet for Ukraine.) Throughout the work, Lyons dynamizes the page itself—at times it functions as a field, other times it seems a screen, still other times, a “page,” as one might conventionally understand it, a surface for print.

Breadbasket contains a remarkable long section, “furthermore New York,” (where we trace—among other things—the poet-emigrant’s earlier brief return to the U.S.). The book features episodes in Ireland and a section, “Fell,” that tracks the poet’s own ancestry and “fallings” (we might say) through generations of women: this particular movement culminates in a wonderful section in which a grandmother’s handwriting moves boldly, touchingly and perhaps a bit pathetically across the page. “Furthermore New York” offers a strong and surprising turn on family inheritance, U.S. and Irish relations (in all senses), linguistic cruxes, what’s traced and traceable. Breadbasket is especially concerned, then, with migrations, personal and transpersonal; the book is punctuated in its last movement (the “Whaling Log” episodes) by a rollicking Melvillean sea-voyage—which reminds us that the Pequod was itself a ship of many nations and voices.

Lyons’ extensive and intensive work in poetics, video, criticism, animation, and the archive mark her as a most unusual artist, scholar and curator. Her work in all registers is delicate, cumulatively powerful, at times elusive, yet also coherent in its means and preoccupations: the feel of the contemporary, the question of place and identity, how to map oneself and others, how to inscribe—provisionally—a place, or simultaneities of placings. (Read—and hear her read—her poem, “Developers.”) Lyons wrote an impressive PhD thesis (soon to be a book) on the experimental filmmaker Hollis Frampton—and there she argued that Frampton achieved a lyricization of cinema. Her own work in Breadbasket suggests a cinematics of lyric, with its discrete yet related sequences, its montage-like compositional logic. Look for this work, and for more from Lyons, soon.”

You can buy the book directly from Veer Books in London (easy if you pay with sterling or euro and better for the wonderful collective of poets and scholars who run Veer) or buy from Amazon if you live in the US.